This multicentric controlled clinical study was conducted to investigate the effect of Joint Cellogie on a large cohort of patients with joint troubles, in particular joint pains and troubles of the mobility.

871 patients were recruited by a total of 180 french physicians.

The study was designed in 2 phases of 2 months each.

The improvement of joint pains and joint mobility was estimated by the physician and the patient according to a scale of intensity of pain (Analog Visual Scale) and a scale of amplitude of the movements from 0 to 5.

The comparison of results obtained in group A and B indicated that Joint Cellogie appeared more efficacious for the improvement of symptoms than habitual treatment. 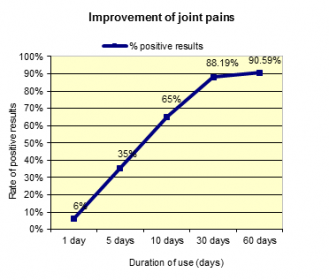 Moreover, the association of Joint Cellogie and habitual treatment for joint troubles (group B become an active group in phase 2) allows to almost double the efficiency of the benefits obtained on the pains and the joint mobility.

This study demonstrated that Joint Cellogie could safely be used for the management of the symptoms of joint pathology.